A Guardian Flight turboprop prepares to take off from Skagway’s airport last summer. The company is taking over all medevacs for the SouthEast Alaska Regional Health Consortium. (Image courtesy Guardian Flight on Facebook)

Federal investigators say they’re baffled over what caused an air ambulance over Southeast Alaska to rapidly plunge into the water in January of last year — killing all three aboard. The recovery of the Guardian Flight’s voice recorder failed to capture the flight’s final moments that might have explained what caused the fatal crash about 22 miles west of Kake.

Audio recorded nearly two years ago by air traffic control the evening the flight disappeared sheds no new information on what caused the fatal crash. It was released by the National Transportation Safety Board on Wednesday as part of its factual report.

Pilot Patrick Coyle is heard preparing to land the King Air 200 in Kake to pick up a patient.

NTSB’s chief investigator Clint Johnson says everything in those final moments is routine, as the pilot moved to make his approach on Jan. 29, 2019.

“There’s no indications of any problems before he switched over to, basically, a local frequency that announces his intentions,” he told CoastAlaska on Thursday.

Then something went terribly wrong. Flight data logged by radar shows the twin-engine Beechcraft suddenly veered to the right at about 6:10 p.m.

“Has medevac N13LY checked with you at all? Looks like was a little bit low,” an air traffic controller is heard saying.

“And then, unfortunately, at the end of the recording is when they started looking for him,” Johnson said.

Investigators later determined that the plane dropped about 2,575 feet in 14 seconds.

An intense search for wreckage followed around Frederick Sound. Initially, the Coast Guard sent a cutter after its Sitka-based helicopters were grounded with a maintenance problem — and later, a helicopter from Air Station Kodiak arrived. But it’s unlikely that the delay in the air search made any difference.

The Guardian plane was heavily damaged and had sunk in deep water.

A cockpit voice recorder captures pilot interactions that are not radioed to air traffic control — in a 30-minute loop. But not in this case.

After drying and cleaning the unit, all investigators discovered was a recording of a May 15, 2015 flight into Fort Yukon. Investigators were able to pinpoint that date because the crew was listening to Game 6 of the NBA playoffs. An announcer gave the score of Golden State Warriors leading the Memphis Grizzlies 58-49 at halftime.

There was no useful information on the recorder beyond that day.

After recovering pieces of the aircraft, investigators didn’t find any mechanical faults. The only thing out of the ordinary was that the three crew seats recovered were unbuckled. 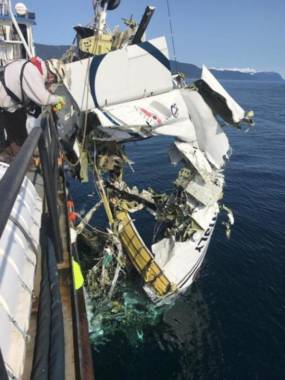 Wreckage from the air ambulance was recovered in several hundred feet of water. (Photo courtesy of National Transportation Safety Board)

Investigators aren’t speculating over what significance that could have. The NTSB found there appears to have been a sudden and unexplained loss of control that, Johnson says, led the Guardian Flight air ambulance to crash into the water at high speed.

“Beyond that, we really don’t know,” Johnson said. “Unfortunately, every road that we took every lead that we got ran pretty much to a dead end.”

The loss of the three-member air ambulance crew was a tragedy felt in Alaska’s medical community, especially Juneau where they lived.

A company spokesman wrote in a statement that Guardian Flight went to great lengths to try and recover the missing crew members’ bodies.

“We await the Final Report from the NTSB with the results of its analysis, findings, and probable cause of this accident, which is expected in a number of months,” wrote Guardian spokesman Jim Gregory on Thursday.

NTSB’s Clint Johnson says the mystery of the cause of the crash has been frustrating for the air ambulance company, the crew member’s family and friends and for federal investigators seeking answers or lessons learned.

What tourism bubbles may seem like in Southeast Alaska port communities

The primary doses of a COVID-19 vaccine might be distributed nationwide in just some weeks. Right here’s what we all know thus far about Alaska’s plans.