A pair of skiers hike out to Pittman’s Ridge, the far western boundary of Eaglecrest Ski Area. ( Matt Miller/KTOO)

January is the peak month for avalanches. It’s also the deadliest time for people who venture out into the backcountry.

But according to recent research, it’s not those who are brand new to the backcountry who’ve been getting caught in avalanches during the pandemic. More often, it’s experienced skiers getting themselves into trouble. And the new Coastal Alaska Avalanche Center is trying to help.

According to the Colorado Avalanche Information Center, 23 people died in avalanches in the U.S. last year. That includes three people killed in Alaska. Over the last seventy years, Alaska is second only to Colorado for total number of deaths.

The City and Borough of Juneau routinely issues urban avalanche advisories. But those only apply to the nearby mountains that tower over downtown.

Usually, anyone who goes outside Eaglecrest Ski Area boundaries or heads into the backcountry wouldn’t know about conditions unless they’re trained to recognize avalanche hazards.

Mike Janes, a Juneau-based avalanche forecaster and educator, said the new Coastal Alaska Avalanche Center compiles observations from the general public as well as professionals and puts them up on a website for people to check before they head out. 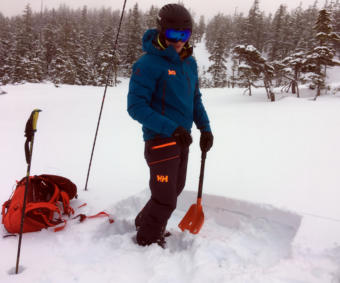 Ski guide Ed Shanely pauses while digging a snowpit just outside the boundaries at Eaglecrest Ski Area on Jan. 20, 2020. (Photo by Matt Miller/KTOO)

“We really encourage anybody to post. It’s kind of a crowdsourcing approach, right?” Janes said. “If somebody sees an avalanche, or triggers one, or sees some sign of instability, it’s great to be able to share that. And it doesn’t take a professional to share a lot of this information.”

The website also includes a map of alpine weather conditions around Juneau.

Janes said the goal is to provide avalanche forecasts for some of the more popular backcountry recreation areas around Juneau like Mt. Troy, Mt. Ben Stewart, Mt. McGinnis, Dan Moller Trail, northern Douglas Island, and the backside of Mt. Roberts and the Perseverance Basin.

With the pandemic prompting more people to get outside and away from others, Janes is concerned about people heading into the backcountry without avalanche experience.

But it turns out that Janes may need to worry more about Juneau’s advanced and expert skiers and snowboarders than those who are new to the sport. 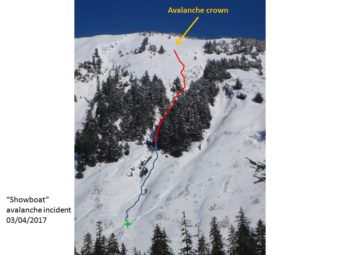 Eaglecrest Ski Area Snow Safety Director Brian Davies marked up this photo of Showboat to show the approximate paths of the rider and avalanche on March 4, 2017. The blue line is where the person slid and walked out of the gulley. The green star is where ski patrollers made first contact with the patient and escorted him to the base area and ambulance.

Ethan Greene, director of the Colorado Avalanche Information Center, said it’s already been a rough season in the Colorado backcountry.

“We have had four fatal accidents in Colorado so far this year, all in December,” Greene said.

Greene is also co-author of research looking at the training and experience of those caught in avalanches immediately before and after the pandemic closed Colorado ski areas in mid-March.

Greene says there were worries then — just like there are now in Juneau — about new users like beginning and intermediate skiers and snowboarders venturing outside those closed areas.

“And that was going to continue into this current winter where the ski industry was going to have more regulations,” Greene explained. “And so, more people were going go into the backcountry and that these new users, these inexperienced users, we’re going to cause a bunch of accidents.”

But Greene said that wasn’t the case. They discovered that advanced and expert users — those who already had specialized training and skills to identify hazards and do rescues — were more likely to get caught or killed in an avalanche.

“We did see some accidents where people said that they were trying to go into new places because of abuse patterns, changes and use patterns,” Greene said. “So, you know, we certainly can’t say like, you know, everybody was doing that. But we can point to, again, anecdotally, a couple specific events and say, you know, ‘Hey, that did happen.’”

In other words, there were a few people who admitted using their training and experience to venture further into potentially risky areas in an effort to get away from others. 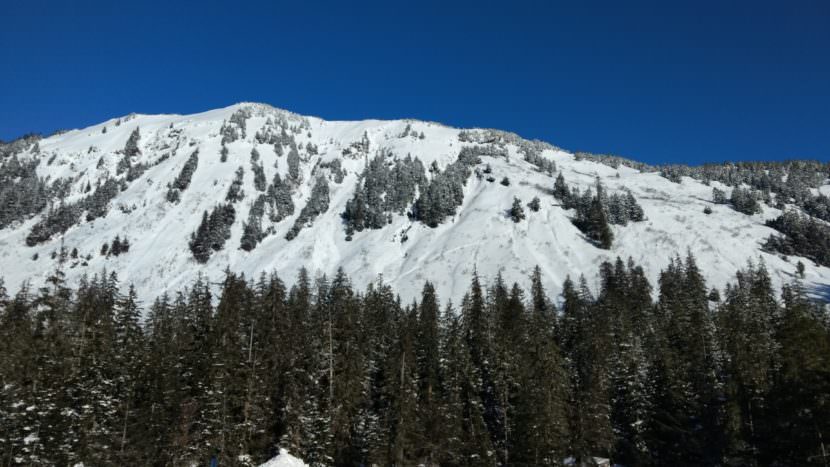 An avalanche down this ridge outside the Eaglecrest Ski Area boundary facing the parking lot caught one skier on Saturday, March 4, 2017. The skier was injured. (Photo courtesy Mikko Wilson)

PBA: As rivals beef up, Alaska needs to be ‘higher collectively’ – ABS-CBN Information